This tour will embark on a full-day trip to Abu Dhabi. Abu Dhabi is the capital of the U.A.E. as well as the country’s administrative center. It is widely recognized as the Manhattan of the Middle East. On your way to Abu Dhabi, you will pass through the free zone of Jebel Ali, the world's largest artificial harbor.

Upon reaching the city, your first destination will be the imposing mosque of Sheikh Zayed, the third-largest mosque in the world, accommodating up to 40,000 worshippers. This mosque is best known for its giant domes and immaculate white color. You will then visit the neighborhood of ​​Al Bateen, home to the royal palaces and corniche, the city’s seafront and the perfect standpoint from which to admire the artificial island of Lulu. The tour continues into the grounds of Heritage Village and Emirates Palace, a 7-star hotel famously known as the most luxurious hotel in the world. Just before lunch at a typical local restaurant, you will admire the Palace of the Sheikh, which was, of course, once the home of Sheikh Zayed, the founder of the country. Your last stop in Abu Dhabi will be Union Square, also known as the “Cannon Square”, the imposing central square of the city.

On your way to your back, you will pass by Sports City, the largest sports arena in the Middle East with the capacity for up to 50,000 spectators. This stadium has hosted celebrated international sports events such as the final of the FIFA Club World Cup. 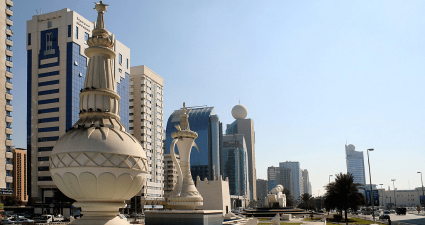 This tour will take you ...

This tour will embark you ...

This tour consists of an ...

This tour consists of a ...

Whats So Great About

Only the BEST FOR YOU.

by contacting ​one of our specialists...

Click on any of the icons below and check out our social media accounts to stay updated on our destinations and activities..

We Accept
©2020 Galaxia Group. All Rights ReservedPowered by Digital Experts